The Phoenix Art Museum recently add Sara Cochran as their new modern art curator. As one of her first tasks in the position, the museum reinvented the contemporary photo galleries in the 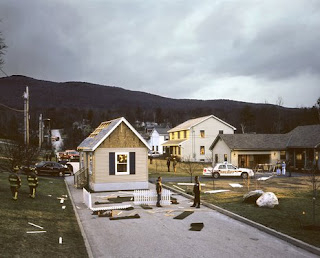 One room of the five part installation is a gallery featuring wall sized photographs. Including this image “Untitled (House on the Road)” by Gregory Crewdson. It is exciting to see the museum recognize the power of these large scale photographs and introduce more of them to the collection.

The Phoenix Art Museum has reinstalled its contemporary galleries in the first-floor Katz Wing with a series of “mini-shows.”

The large paintings and photographs from the museum’s collection, with some loans from some local collectors make this 5-part installation a must-see.

Third gallery features monumental photographs. Unlike the snapshots you are used to, these photos are wall-sized. German artist 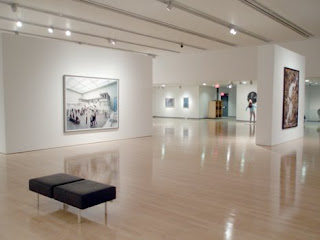 Thomas Struth is the king of this genre. This is his “Pergamon Museum, Berlin” from 2001. Notice how in the gallery it takes up a good chunk of wall. These giant photos are something of a current fad.

Another giant photo is Candida Hofer’s “Palacio Nacional de Ajuda Lisboa VII” from 2005. The genre favors images of large public spaces and incredibly sharp detail, so your eye can wander through them, fixing on this or that.

Another large photo is Gregory Crewdson’s “Untitled (House on the Road)” from 2002. Although it is a photo, the subject is oddly mysterious and unreal. What is that house doing on that street?